Skippy was surrendered to Marion County Animal Services after she was found roaming the streets in Reddick, Florida.

She had been at the shelter for a while, had skin and eye issues, bad teeth and an injured front leg. The shelter thinks that her leg was broken and never properly healed, so their only option was to amputate her leg. They also found bullets lodged in her leg and she had stopped eating at the shelter.

Although Skippy had a tough life prior to being adopted, it was a matter of fate that brought her, to her new nome.

Kayla, Skippy’s new Dog Mom, was filling the vending machines at the shelter, as she normally does. She decided to visit the dogs available for adoption that day and some of them were jumping 6 ft in the air with excitement, but not Skippy. Skippy did not get up to greet Kayla when she walked by. She was thin and had very little fur on her body.

“I made a phone call to my husband, who was not on board with adopting a dog, but who is also powerless against my tears and with a little convincing, I got the ok to sign the paperwork and bring Skippy home.” Kayla told us. “When they brought Skippy to the front to meet me, we bonded instantly. I wanted nothing but to show her love and take good care of her on what might be her last few days on earth.”

When Skippy realized she had a new home, she was like a new dog. She was eating, running, jumping, playing and showing signs of having a lot of life left in her.

Within a week, Kayla took Skippy for her first vet appointment and she was diagnosed with mange, dermatitis, severe environmental allergies and periodontal disease.

Skippy has been part of Kayla’s family since October 31st, which is fitting, because she’s such a sweet dog. That’s a Halloween joke 😉

She struggles with stairs, getting up on the couch and is still learning her limits. She loves going on walks and she just wants to go go go, but tires quickly. Kayla ends up having to carry her home most days, but she said it’s “just the labor of love.”

We met Skippy at our Pet Photo Shoot Fundraiser for Humane Society of Marion County. This story is also part of our Pit Bull Picture Project. We tell stories about Pit Bulls, show their goofy and lovable side with hopes of inspiring more pit bull adoptions. 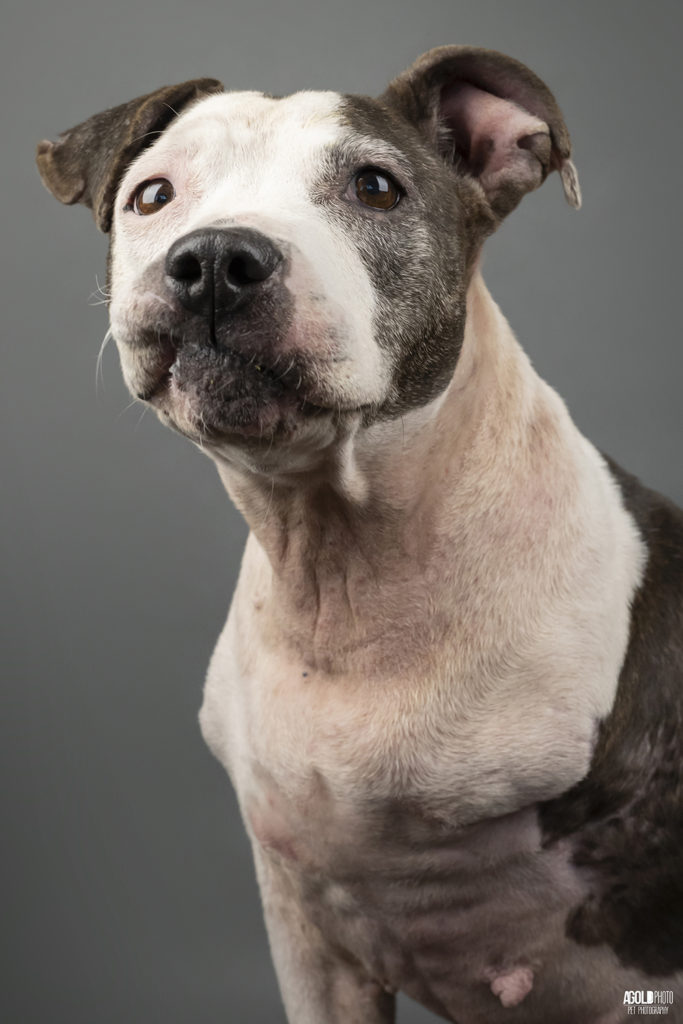