I recently teamed up with FairyTail Pet Care to raise money for Southeastern Guide Dogs at c.1049 Florida Beer Bar. We hosted a Pet Photo Shoot Fundraiser together and I had pleasure of meeting Ruby, a Louisiana Catahoula Leopard.

Ruby was wearing a therapy dog vest and I could tell there was something special about her. I knew from my work at the Humane Society of Broward County that white dogs with light eyes tend to be blind and I was right. Not only is she blind though, she’s deaf too!

I asked her Mom, Erin, if I could write a story about Ruby, thinking most don’t come across blind and deaf dogs often. Not only does Ruby have these disabilities, she is also in training to become a therapy dog. Once hearing that, I knew I had to tell her story.

Ruby is Deaf and Blind

Her markings are genetically labeled “Merle” and when 2 like marked dogs are bred together you get a “double merle” which causes genetic mishaps resulting in deafness, blindness and sometimes both in approximately 1/3 of the litter.

Ruby was born this way along with 2 sisters and breeders do this intentionally with the thought that they’ll get more pups with more distinct/prettier markings or are just uneducated.

Erin had just lost her dog Scarlett after 13 years and just happened to see a news story in Ft. Myers, Florida about Ruby and her siblings. She immediately fell in love with her and wanted to give her a chance, even if her life was short lived. Ruby was cared for by the Gulf Coast Humane Society before finding her forever home with Erin.

Ruby brings smiles to her family everyday, particularly when she acts in a way that she has no idea that she’s deaf or blind. Most people are surprised when Erin tells them that Ruby is disabled based on how she acts. She doesn’t jump or get scared when people touch her, but rather she embraces the affection and thrives from it.

Ruby Has a Job to Do

Ruby is in the middle of therapy dog training with Ricardo Care of Tampa Bay K9 Solutions. Her training consist of 3 months of  in-house training, which has been modified for Erin and Ruby. The intense program consists of advanced obedience training but also heavy environmental exposure to make sure Ruby will not react when out on a job.

With Ruby’s limited lines of communication, Ricardo utilizes touch through applying pressure to certain areas on her body to signal an action, as well as the use of an e-collar to communicate when not in direct contact with a handler using vibration, which signals her to STOP and sit immediately. This could save her life if she wandered off into harm’s way. Ruby has a few more weeks of training and then Erin and Ruby will work with Ricardo to achieve her therapy dog title.

Ruby’s job as a therapy dog is basically going to be making people feel good. She has this way of just knowing and feeling when someone needs her to just be still. She leans all her weight on you and pretty much gives hugs with her body. Erin is planning to bring her to see children that have faced physical and emotional challenges because she can show them all that she has overcome and give them the confidence to do the same, all while getting puppy snuggles. The VA is also high on Erin’s list to visit with PTSD patients and even some returning having lost sight, limbs etc.

According to Ricardo, Ruby truly is a special case not just because of her disabilities but because of her personality. She fits the mold perfectly as a therapy Dog candidate.

Since Ruby is blind and deaf, I couldn’t use my typical tactics to get her attention. However, her sense of smell is heightened and I was able to entice her with Justin’s peanut butter and treats. Erin also uses her vibration collar to tell her to sit, which was truly amazing to witness.

Once the photo shoot was over, she sat in my lap like a puppy would. I’m guessing she doesn’t know how big she is.

If you are interested in getting photos of your pet, check out my numerous Pet Photo Shoot Fundraisers or in-home pet photo shoots, especially if your little one has a story to tell like Ruby. 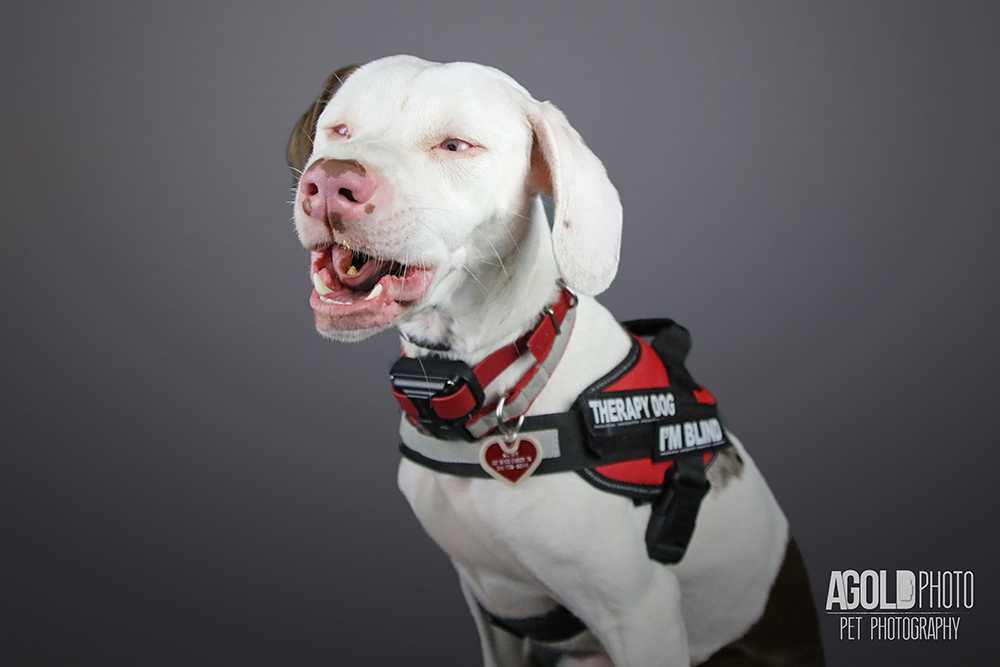 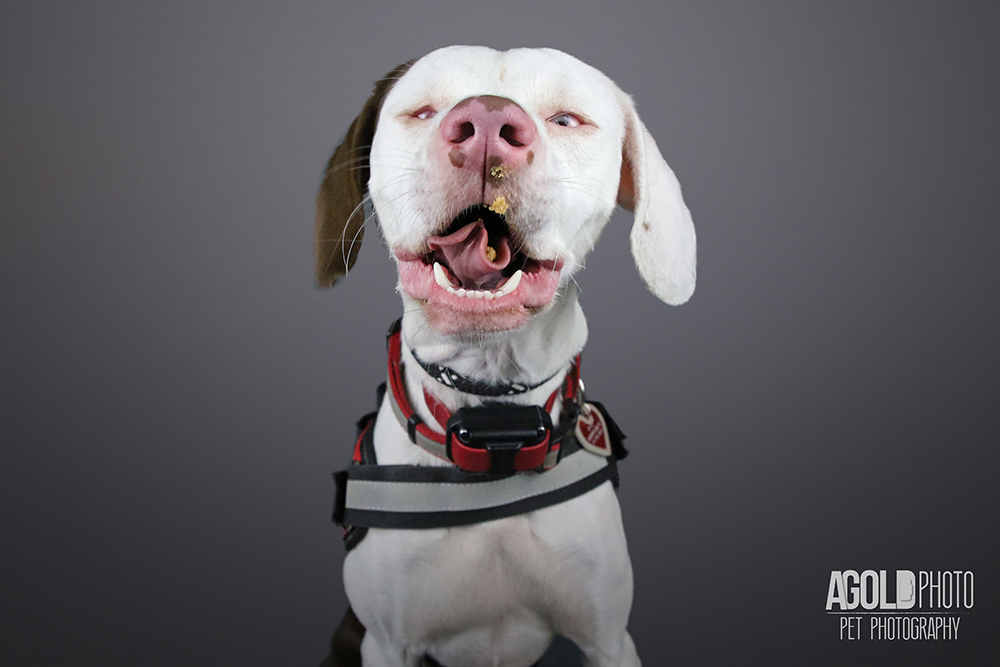 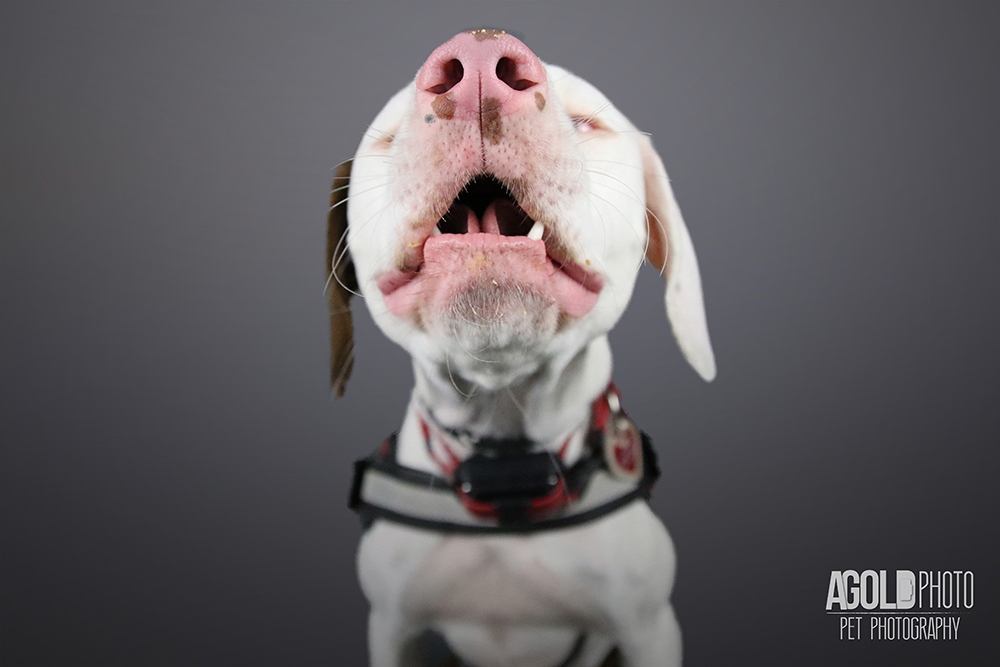 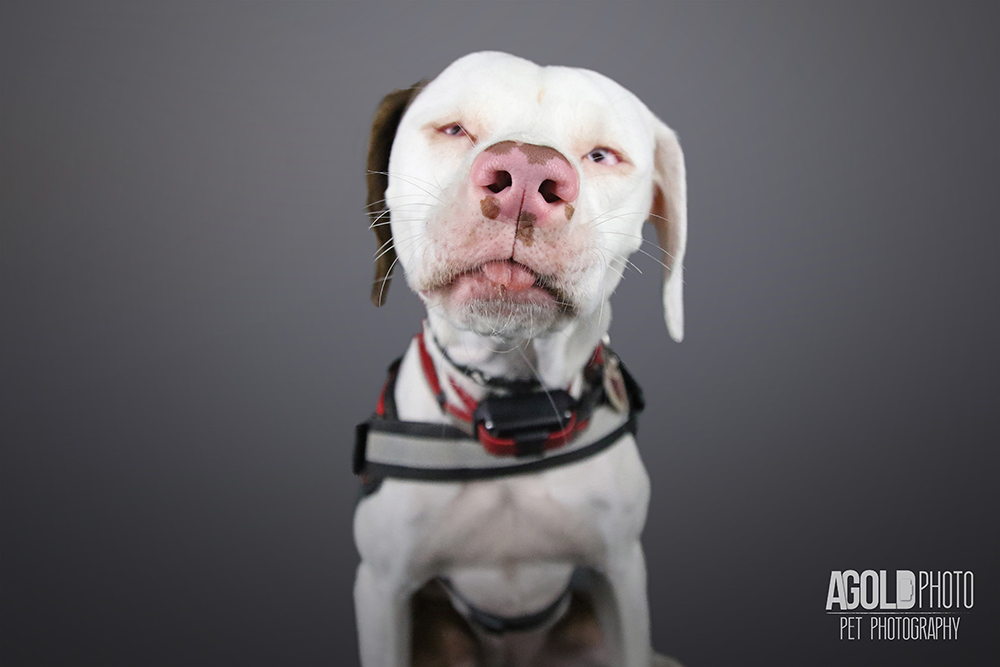 If you are interested in getting photos of your pet, check out my numerous Pet Photo Shoot Fundraisers or in-home pet photo shoots, especially if your little one has a story to tell like Ruby.